by Kelly Parliament, on Israel and Palestine

The evangelical group, Christians United for Israel (CUFI), states on its website that “it is crucial to educate Christians on the biblical and moral imperatives to support Israel and to build Christian support for Israel throughout America.” CUFI’s president has been known to state that Christians are commanded by God to support the Jewish state of Israel at all costs. Many evangelical Christians agree with CUFI’s statements. I mean, the Bible does say something along those lines, right? But there are many questions and problems associated with the unconditional evangelical support of Israel. For six million people living in the Palestinian Territories, Israel is not the ushering in of the end times; Israel is an oppressive force that steals, imprisons, and murders. When Christians unconditionally support such a power, they will inevitably be considered guilty of the same crimes. And, worse yet, when Christ is involved in our justification, the Gospel for millions of Palestinians becomes synonymous with oppression and murder.

But wait: isn’t Palestine run by terrorists? Aren’t we supposed to bless the Jewish people? What about Israel’s role in Revelation? Don’t Palestinians receive equal rights as a part of Israel? Many of these questions stem from the lack of political literacy among evangelicals on the Israel/Palestine conflict. We have simplified the problem down to make it fit into our black-and-white view of the world. One side loves Christians, the other hates them. One side is loved by God, the other the enemies of His plan. One side is good and other side is evil.

What happens with we actually look at the facts and our own theology more closely? Will we be able to maintain our staunch stance in certainty that we will always be on the right side? It is time American evangelicals reassessed their stance on Israel. It is time to rethink Israel and Palestine from the:

It is common among conservative evangelicals – particularly in the Baptist tradition – to believe we must stand firmly behind Israel in everything they do and if we do not, we are turning our backs on God and His people. It is believed that people who do not take this militant stand for Israel are therefore condemning Israel and calling for the destruction of the Jewish state. This is taking a very gray issue and making it an “all or nothing scenario” as well as creating a false dichotomy in that you either support Israel or you wish for their destruction.

One does not have to believe that God is completely done with the Jewish people to have sympathy for and provide support for the Palestinian people. One does not have to believe we must stand behind Israel in everything in order to wish for the prosperity of Israel. One does not have to believe that Israel is a state sanctioned by God to be a Christian. For every American evangelical who believes the Jewish state of Israel is the promised Israel of Revelation (an element of dispensationalism) there is another brother/sister abroad who believes the church has replaced Israel in the covenant (covenant theology). Many prominent theologians, including John Piper, hold to covenant theology, and many others identify as being somewhere in between the two on a spectrum.

This is an area most the world is largely ignorant in. What is the current political situation, and where can we go from there?

The current situation is that the Palestinian territories of the West Bank and Gaza are under the control of the state of Israel. Their borders are controlled by Israel and Israel has all the power to move soldiers in and out at its own discretion. The Palestinian people do have an elected government and are recognized by 134 countries as an independent nation despite Israel’s claims.

There are major misconceptions that are often promoted in order to sway political sympathizers one way or another. Many people insist Palestinians are given every right and are treated just as well as Israeli citizens by the Israeli Defense Forces (IDF). The truth is Palestinians are continuously denied the right to worship in sacred places of historical significance, to travel between the two territories of the West Bank and Gaza, and to enter any ancestral lands administered by Israel. The IDF is notoriously reckless when it comes to civilian causalities (see the most recent Gaza War). On top of all that, more and more Palestinian land is being seized for illegal Israeli settlements in the West Bank. To assert the Palestinian people are treated with equal rights and dignity is to voice ignorance on the subject. While one may be able to make a logical argument on Israel’s behalf of its treatment of Palestinians on political or military grounds, one cannot deny the affects of Israel’s policies on the Palestinian people.

On the other side of the issue, Israel would deny that Palestine was ever an “occupied territory,” but rather a disputed one because it was never independent as a nation. Israel has repeatedly made efforts to work toward peace with the Palestinian Authority (PA), the “government” of Palestine elected by its people, and the PA has been directly responsible for the failure of many peace deals. Many Palestinians believe the PA is working with the Israeli government to prevent a solution.

The conflict is often set up – not only in Christian circles – as people of Jewish descent in a war with people of Arab descent, often leading to divisions along racial lines of opinions on the issue as well as accusations of anti-Semitism to anyone who dares question the actions of Israel. This misconception is particularly favored by the Christian community, as we love to see it as a struggle between “Isaac and Ishmael,” justifying our beliefs that we are blessing the descendants of Isaac in opposition to his cursed brother.

The beliefs stated above are harmful for a couple main reasons: 1) it supercharges racial prejudices and prevents reconciliation between different peoples and 2) it ignores minorities and their stake in the conflict, meaning they are often left out of consideration in aid provisions and peace talks.

The conflict is not “Jews vs. Arabs.” While Palestine as a country is mostly Arab, with a few small minorities such as a population of Samaritans, Israel as a country is incredibly diverse. While officially a Jewish state, even what denotes a “Jew” is tricky, as Israel is home to “Jews” who trace their heritage from many countries, including Russia, Poland, Ethiopia, Iraq, Yemen, Morocco, and India. But those that identify as Jews are not the only people living in Israel – about 20% of the population of Israel is Arab. There are also other ethnic minorities including significant numbers of Armenians, Samaritans, and Argentinians. Those who label criticism of the Jewish state as anti-Semitism are not only denying the critical involvement of other minorities in the nation of Israel, they are also labeling the thousands of people in Israel and around the world of Jewish descent who are protesting Israel’s actions in Palestine as “self-haters.”

Recognizing the two states as less monocultural as most people believe is a step in the right direction to understanding the conflict. Christians are not the only ones guilty of this oversimplification however: those around the world opposed to Israel can be quick to blame the entire situation on “the Jews,” often giving rise to the anti-Semitism those in peaceful opposition are so vehemently against.

The other oversimplification – perhaps the biggest one Christians cling to – is the perception that the conflict is between Jewish state of Israel and the Muslim people of Palestine. While Israel has declared itself a Jewish state and many Palestinian militant organizations, such as Hamas, attach themselves to Islamic doctrine, the conflict is not defined by religious tensions. The truth is while most people in Israel identify as Jewish and most in Palestine identify as Muslim, that is not where the conflict stems. In fact, most Israelis who identify as Jews are considered secular, and many Palestinian militant organizations are connected to communistic ideals. Christians might be surprised to learn that Palestine has a larger population of Christians than Israel – percentages of Christians estimated around 8 and 2%, respectively (Palestinian Christians often adhere to and defend strict covenant theology). Israel also contains significant minorities of Muslims and Druze. Sixteen percent of Israel’s population is Muslim. The Druze, a monotheistic religious sect often persecuted by its Muslim counterparts, play a crucial role in the Israeli military and are often some of the Jewish state’s most vehement supporters.

We have the same issues listed in the section above due to misunderstanding of the religious situation. Minorities get ignored and the representation of the conflict becomes skewed, preventing any lasting changes. Christians often love to look at those of the Jewish faith as our allies in this world and have clung to the Jewish state in false hope that it will bring glorification to our God. Palestinian Christians then cry out to us, asking us why we have abandoned our brothers and sisters in Christ for a secularized state that has betrayed the cause of Christ through oppression.

In this last section, I ask the question “As Christians, where does our true loyalty lie?” Does our loyalty lie with a non-Christian state that has failed time and time again to be a “light to the nations?” Or does it lie solely with our brothers and sisters in Christ, most of whom in the region are trapped in the Palestinian territories? Or perhaps neither?

The truth is our loyalty is to Christ and the preaching of the Gospel. By extension, our loyalty to Christ means loyalty to our brothers and sisters. It means supporting Palestinian (and Israeli) Christians. It means loving the Palestinian (and Israeli) people. No matter our political convictions, no matter our eschatological beliefs, we are called to be a “light to the world,” and we cannot be that if we are sowing seeds of discord between peoples and nations. We cannot do that if we are ignoring the Palestinian people’s cries. We have greatly damaged our reputation, and that of Christ’s, in the Muslim world. It is time we started acting in a way that reflected love and wisdom rather than prejudice and misunderstanding. 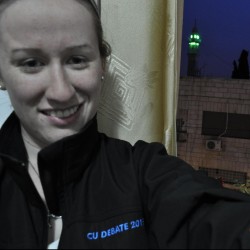 Kelly is a senior International Studies major at Cedarville University. Her journalistic interests include the Israel-Palestine conflict, Islamic theology, and missions.